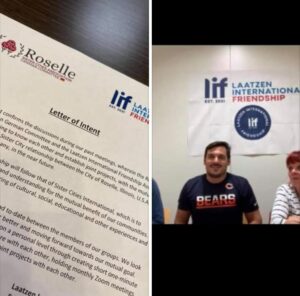 The RSCAGC was formed in 2019 and charged with researching and communicating with like size towns in Germany. In recognition of Roselle being settled and founded by Germans, the RSCAGC’s goal was to establish a Sister or Friendship City by 2022, when Roselle celebrates its 100th Anniversary. On Thursday, October 7th, the date of Roselle’s 99th anniversary, members of the RSCAGC and LIFA met via Zoom and signed a Letter of Intent, forming their official Friendship City relationship.

“The signing of the Letter of Intent with Laatzen is a great moment in Roselle history. As we look forward to our centennial next year, our committee looks forward to strengthening Roselle’s German roots as we develop a deeper relationship with the people of Laatzen,” said RSCAGC Co-chair Sara Bruno.

“Despite the challenges of the pandemic, we are happy to have found a great partner in Laatzen. We look forward to meeting our counterparts in person in the future,” added RSCAGC Co-chair Jerry Smiley.

The RSCAGC and LIFA members are committed to getting to know each other and planning joint projects, with the mutual goal of establishing a formal Sister City relationship in the near future. This relationship will follow the mission of Sister Cities International, which is to encourage greater friendship and understanding for the mutual benefit of both communities. They will do this through the sharing of cultural, social, educational and other experiences and opportunities.

“It is exciting to watch the development of a new sister city unfold as we approach our centennial celebration. The selection of Laatzen will further our connection to our early German roots as a farming community,” said Roselle Mayor David Pileski. “I am always in awe of our wonderful residents who volunteer countless hours to initiatives like this deepening our cultural experiences,” he added.

The RSCAGC welcomes people who are passionate about the German heritage to get involved with their vibrant and active group as they plan upcoming activities. For more information about the RSCAGC, visit their website at https://rosellesistercities.org/about-us/roselle-germany/.