For several weeks, Bochnia has an honorable street in Roselle, in its partner city in the USA. The modest ceremony of naming took place on November 12, while the Grand Opening was scheduled for February during the annual carni- In the year of the 100th anniversary of regaining independence by Poland, I dreamed of a Balthasan street in Roselle … The Committee for Affiliate Cities decided that it was a good idea, and that the same city authorities should be persuaded – Barbara relates in an interview with Bochnianin.pl Rajska-Kulig, a resident of Roselle with Bochnia roots (she emigrated from Bochnia to the USA in the late 1980s).

The idea was presented to the mayor of Roselle and the city council there. In the end, the official decision was made and here it is! One of the streets in the center of the town bears the honorary name of “Bochnia Sister City Street”!

At this point, it is worth clarifying that “honorary name” means an appropriate designation in the field (on special brown boards), but it does not involve bureaucratic consequences and, for example, change of addresses. Officially, it’s still Prospect Street. In Roselle, it is only the second such honorary name. By the way, an interesting solution, right?

Prospect Street is located in the very center of the town – there is a town hall, local museum, police and fire brigade. The honorary name of “Bochnia Sister City Street” was given to her during the ceremony taking place on November 12, connecting the celebration of Poland’s regaining independence and American Veteran’s Day. Its grand opening will take place on February 2, 2019, during the annual carnival gala. 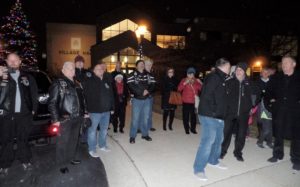 Roselle lies approximately 45 km. west of Chicago, belongs to its agglomeration. Among the 23 thousand residents can be met by our compatriots who emigrated for great water.

The partnership agreement between Roselle and Bochnia was signed on August 3, 2003 at the Itasca Country Club in Illinois. They were signed on the behalf of both cities by then mayors: Gayle A. Smolinsky and Wojciech Cholewa.